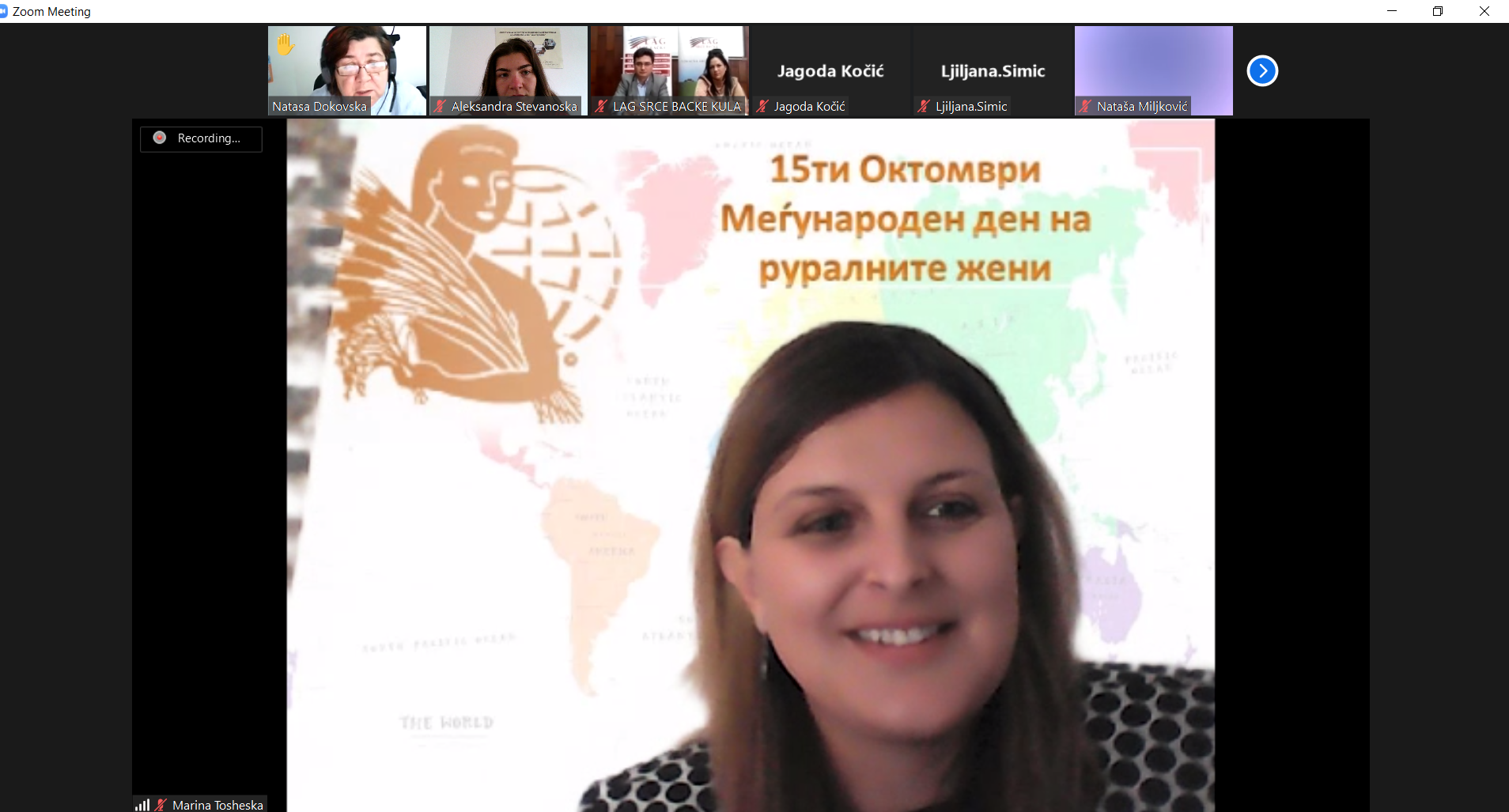 LAG AGRO LIDER in partnership with the Network of LAG’s and the Network of Local Action Groups in the Republic of Serbia, are joining the global movement to empower rural women - as entrepreneurs and leaders, by marking International Rural Women's Day, October 15th through an online event " Rural women - challenges, rights, and opportunities.

Women farmers make up 43% of the agricultural workforce worldwide, and in some parts of the world, about 70%. They are at the forefront of the fight against climate change, managing natural resources to feed their families and communities.

Gender equality and the programs for access to rights and economic empowerment of rural women are rooted in EU policies, which outline initiatives for sustainable and inclusive rural development through the potential and perspective of rural women.
- Attaché of the Austrian Federal Ministry for Social Affairs, Health, Care and Consumer Protection of the Republic of Austria in the Republic of S. Macedonia.

“Women in the rural areas in the Republic of Serbia are facing many challenges in terms of property ownership, that is 88% do not own house/apartment, 84% do not own land. 74% are unpaid family workers, around 12% of the women in rural areas do not have health insurance, and 60% are not included in the pension system."

The findings from the conducted research of the position of women in rural areas show that main obstacles for formal employment of the women in the rural areas are: limited opportunities for finding a job outside agriculture,  lack of kindergartens, lack of information on vacancies, and discrimination due to the unwillingness of employers to employ women who are also parents. ”
- Jagoda Kocic, Network of Local Action Groups of the Republic of Serbia

In our country, women in rural areas are facing inaccessibility to the public, social and medical infrastructure as a result of the demographic changes, as well as the inability to exercise rights under the legislation because most of the 47% of rural women are part of the informal economy. 38% of the women in the rural areas do not have their own income, they own less than 20% of the land, 64% do not have pension insurance and own health insurance, and women in rural areas for the same work activities earn 33% less than the men.

Research conducted in rural areas confirms the findings that modern living and digitalization have further deepened the “gender gap”, as well as the disparity between urban and rural communities and the existing structural, economic, social, and technological inequalities of rural women.

To achieve the Sustainable Development Goals, gender-sensitive policies and programs are implemented that are focused on the specific needs of rural women.

The EU LEADER program which has been implemented in EU countries since 1991 is aimed to sustainable development at the sustainable devolvement of rural communities through active involvement of women in the process of creating community-led development strategies and decision-making in support of initiatives for social justice and welfare, economic development and entrepreneurship, as well as leadership of the rural women. In our countries, steps have been taken to introduce the LEADER program, but it is necessary for political interventions to focus on accelerating the implementation of the LADER program and support of the Local Action Groups to enable active involvement of rural women, reduce the “gender gap” and sustainable socio-economic development of local communities.